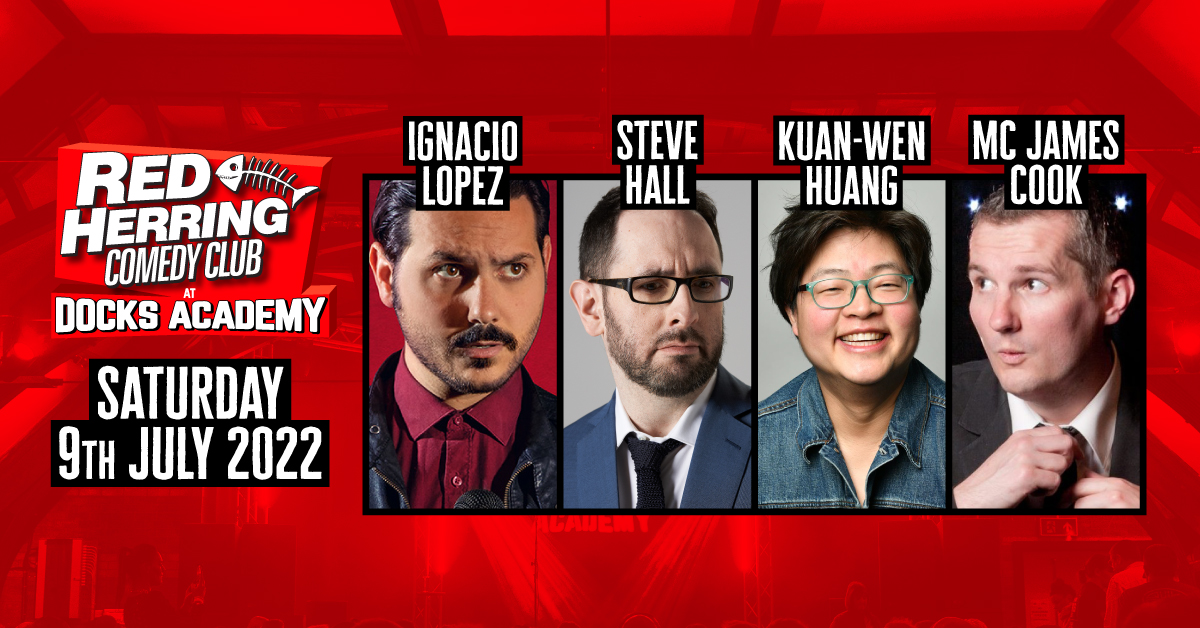 Ignacio is a Spanish & Welsh comedian based in Cardiff. Aside from hosting TV shows, Ignacio has headlined top comedy clubs all over the U.K. and Europe. Ignacio writes sketches, sitcoms, and tweets. Every few months something he tweets will go viral and he’ll gain a few thousand followers before they realise he doesn’t just tweet witty observations about public transport and songs about hating the U.K. – then they unfollow until the next tweet goes viral.

Kuan-wen Huang is an emerging comedian, writer and actor from Taiwan, with major breakthroughs on the UK circuit in the last two years. With a unique voice and his trademark quirky persona, Kuan-wen is an alumni of the Soho Theatre Young Company and recently performed for Comedy Central at the Edinburgh Fringe.For two years in a row, Kuan-wen performed as part of Yellow Xmas comedy show, which “showcases the top East Asian Stand-ups”, sharing the bill with Phil Wang, Evelyn Mok, Nigel NG, Ken Cheng and Yurijo Kotani.

Steve Hall is a stand-up comedian and writer. He is a regular writer on The Russell Howard Hour (Sky), and in 2017, he supported Russell on his international tour, Round the World. Steve previously supported Russell on his 2014 sell-out national tour, Wonderbox, along with his previous shows, Adventures, Dingledodies and Big Rooms And Belly Laughs.

Steve’s Edinburgh Festival successes include his sell-out third show, Zebra –“for sheer unadulterated fun this Fringe, it’s hard to think of too many comedians who will offer the same glee” (The List).

James Cook is a professional comedian based in Birmingham, UK, with over 1,000 gigs worth of experience as an act and compere. He has performed two shows at the Edinburgh Fringe – Adventures on Air (the one about the radio) and Always Be Rolling (the one about board games). His act has been described as “truly original” (Danny Wallace (off of the telly)), whereas he’s been called “suave and chirpy” by that publishing powerhouse, the Bromsgrove Advertiser, and a “sarcastic raconteur” by the Leeds Metro.